Borders, limits, boundaries, thresholds… The border is a concept rich in nuances and meanings that construct themselves in a game of claims and oppositions: closure and openness, fear and hope, oppression and opportunity, uncertainty and future… beyond the definition of the border as “a line that marks the boundary of a state or of one thing with another one”, the border is also a place of projection into the imaginary.

The myth of the Columns of Hercules tells us about two large columns, located on both sides of the strait of Gibraltar, and which had the function of pointing out the limit of the known world in the ancient World. It was the border that limited the land and the seas that had been discovered and navigated until then by Phoenicians, Greeks, and Romans, separating the Mediterranean Sea -the known world- from the Atlantic Ocean -the unknown-. On the other side there was chaos and darkness. The idea of the columns represented the end of the sea, the Latin Non terrae plus ultra (“No land beyond”), the idea that what was beyond was not passable.

The border is also the protagonist of the semantic field of immigration. Wanderings, nomadisms, pilgrimages, invasions, exiles and colonization have turned the history of mankind into a history of migrations. As well as birds, fish and other animals migrate to feed or reproduce, the movements of human population often carry on economic, social and political causes that are translated, ultimately, into survival needs.

Nowadays, the migration phenomena continue its course in its most tragic version. Each day, in the Mediterranean Sea, in the crossing between Mexico and the United States, and in many other hot spots of the planet, thousands of people try to cross a border, venturing to a grueling journey through the cracks of the system. Meanwhile, the legislation promoted by the international elites, such as the migration policies of Trump, or the ones of the Schengen area, have a devastating impact against any hope of leaving behind conflicts, wars, persecution or poverty. Migrating has become as dangerous as playing Russian roulette. According to the International Organization for Migration (IOM), the year 2019 ended with more than 1,200 migrants dying in the Mediterranean Sea and 110,000 arrivals to Europe, which suppose the sixth consecutive year of massive arrivals. These data show the fragility of the border and of those who cross it, becoming victims of an institutional violence that acts in the name of the most extreme form of neo-liberalism, violates human rights, and perpetuates the colonial hegemony controlled by governments and corporations.

But the border is not only the geographical or political boundary of a state or a region, neither is it just a symbol of migration. The border is, in first place, a metaphorical space, a mental place which is necessary in order to conceptualize our identity in an exercise to bring order into chaos. From the moment we are born, we inhabit a space marked by difference, we are classified by a name and a surname, a passport, a nation, a gender, a skin color, a sexual orientation, a language and a long list of tags that act as boundaries in our relation with the world. The word Dhwer, one of the oldest names of the ancient proto-Indo-European world, designates at once the door and the border, but seen from the inside, thus separating the inside and the outside. It is, therefore, a symbol of communication and of separation between one world and the other. In this dichotomy, the security and the power belong to what is inside, ensuring a haven that embraces us. On the contrary, the “other side” is understood as the strange, the exotic, the hostile. A desert and wild space that belongs to the outside, to the realm of the unknown and to the dangerous. For many, crossing the border represents as well a form of transgression and self-affirmation, a way of “knowing oneself” far from the acquired patterns, which are imposed from a cultural system that is given to us. The border becomes a seductive call for the curious who is tired of the monotony of everyday life; for the restless who wants to live exciting adventures; for the non-conformist who aims to break the rigid molds of an obsolete structure. It is in this “crossing the border” where we leave behind the “real thing” in order to enter into an imaginary world full of possibilities.

Form the Roman limes to today’s globalized world, borders may simultaneously play the role of bridge and barrier. But sometimes, despite the best efforts of many States to maintain the rigidity of the borders, there is no valid barrier or supremacy. The crisis of the covid-19 has questioned much of what we believed well established on the pillars of the European Union, convulsing every single economic, social and political actor on a planetary scale. In the geopolitical scene, the pandemic has completely disrupted the chess board of the world-system by imposing a Pax Coronavírica in all of the war fronts. This pandemic has made evident the fragility of a health system that has totally collapsed, leaving millions of dead bodies behind, turning the ordinary reality into a dystopia where the digital surveillance involves the sacrifice of a part of our individual privacy. Ultimately, viruses do not recognize borders.

However, can the border be a habitable place in itself? Defined by its condition of transience, its nature seems to be a dehumanized non-place without identity. However, the thinker Homi Bhabha called “third space” to the hybrid space formed by the mixture of two different cultural narratives. It is not a geographical place but rather a condition formed by the influences of various cultures. This definition takes on its full meaning in today’s globalized world, where people are born in a place but live in another one, which makes their mental space not to belong to any of them, but to third one, which is a mixture of both of them together with many other circumstances. In this sense, we wonder, why borders don’t become thick in order to generate a hybrid space of belonging?

Fotolimo is born from this conviction. Beyond the line as a boundary or as a wall, but also beyond the naif version of cultural diversity as a happy space of convergence of cultures, we embrace the idea of a in-between-media, as a “third space” of indetermination, a “no man’s land” where identities and boundaries are put on hold, or into a process of redefinition. Convinced of the role of the images as a vehicle for social change, we are a festival that aims to inhabit the border in a plural way, fostering critical thinking through photography and visual arts. We aim to do it from a revolutionary position which, on the basis of utopia as a mean of transcendence, believes in the necessity of a new epistemology of borders that takes into account the conflicting limits of identity in the world. Located in a unique cross-border spot, FotoLimo festival has found the ideal framework to reflect on the border from a playful, collective, and transformative perspective, aiming to inhabit the porosity of the border while imagining, creating and enriching from new forms of cultural hybridization so characteristic of today’s globalized world. 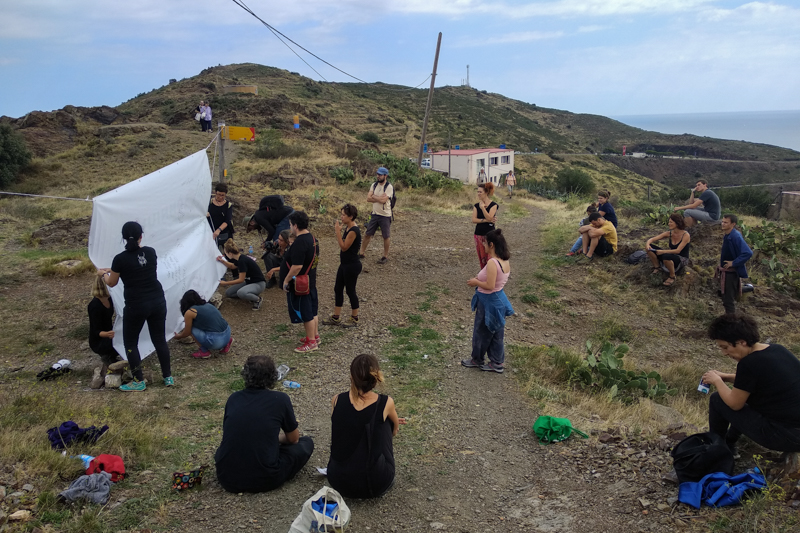